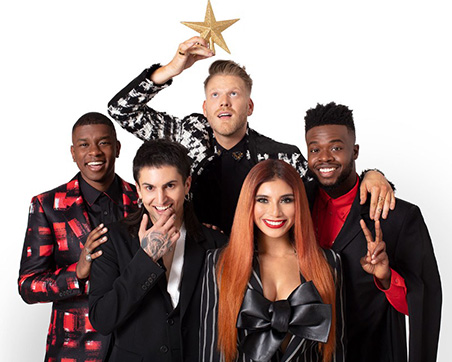 Three-time Grammy® Award-winning and multi-Platinum-selling has sold more than 6.5 million albums and performed for hundreds of thousands of fans at their sold-out shows across the globe. Their YouTube channel boasts more than 13.8 million subscribers, yielding over 2.7 billion video views, and their 2015 self-titled album has been certified gold after debuting #1 on Billboard’s 200. Additionally, seven of their albums reached the top 10 on Billboard’s 200 chart (2 at #1) and received multiple RIAA certifications for multi-platinum, platinum and gold selling albums and singles. In 2015, the group released its first tour documentary - On My Way Home - and appeared in the feature film Pitch Perfect 2. In 2017, the group released PTX Vol. 4 - Classics which features their Grammy Award-winning performance of “Jolene” with Dolly Parton, as well as an arrangement of the John Lennon classic “Imagine.”