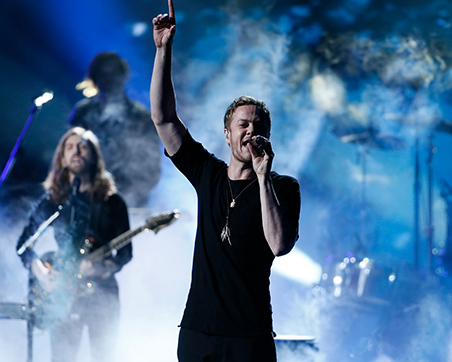 After releasing their 2012 full-length debut Night Visions (featuring the Grammy Award-winning single “Radioactive”), Imagine Dragons spent nearly two years bringing their passionately inventive brand of alt-rock to arenas around the world. To deal with the chaos of a touring schedule that included 130 headline dates and 50 festivals across the globe, the Las Vegas-based quartet threw themselves into creating material for their next album. “So many things were changing for us so quickly, the only way to feel some kind of stability was to keep writing,” says frontman Dan Reynolds, who founded Imagine Dragons with guitarist Wayne Sermon, bassist Ben McKee, and drummer Daniel Platzman. “Going up to my hotel room to work on new songs became something I looked forward to every night on tour,” Reynolds adds. “There were definitely a few times when the person next door’s banging on the wall because it’s 4 a.m. and they’re trying to sleep and I’m in there belting out some song I just wrote.”